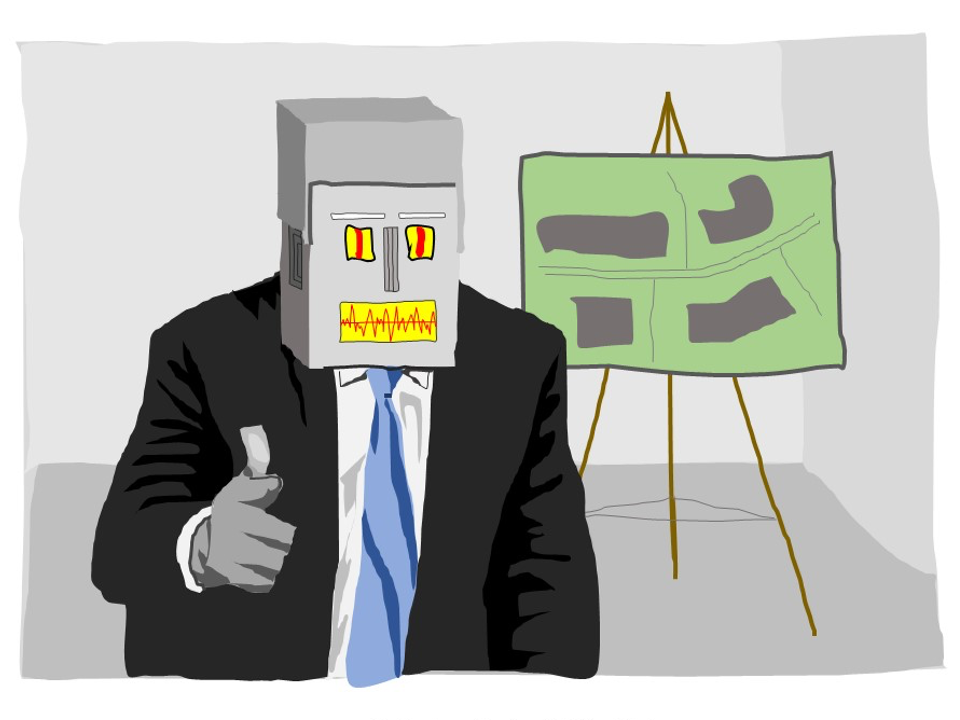 As an architect who has been around long enough to experience firsthand the transformation from hand-drawn to computer-aided design, I can attest to the far greater capabilities and benefits of the latter.  Modern software has made possible the exploration of varying design options to a degree unimaginable a few decades ago.  Where once we had to rely on a few hand-colored elevation drawings and a rendering or two drawn using perspective charts, we now fly our clients around buildings and walk them through spaces using electrons instead of ink and color markers to communicate our design ideas.  Further, computers have enabled a multiplication of details which has yielded construction document drawing sets as thick as encyclopedia (anyone remember what they are?).

However, there have been a couple of transformational effects upon the processes of design that have come about on account of our modern tools.

The first of these is external, i.e., it pertains to the relationship of the architect to those outside the office—the clients.  The second change has been internal, dealing with the intellectual process of creating itself.  Together these have engendered an historic sea change in the manner of thinking required in design.

First, the amount of information that a client may have, and that the client knows he can have in order to make decisions, is much greater now.  In the “old days,” most design approvals were made based on a handful of drawings and a cardboard model.  Although revisions prior to sign-off were certainly demanded, at some point clients were forced to trust the architect’s professional ability and judgment, and agree with it.  Otherwise, the project would be subject to all of the problems associated with delays and indecision.

I can remember one such instance when I worked for the office of Philip Johnson/John Burgee back in the late 1970s.  The AT&T Corporate Headquarters project, the first so-called “Post-Modern” skyscraper, had just been unveiled to a storm of criticism from the New York architectural press.  The phone company’s leadership suffered a case of cold feet, and asked to see some options.  Despite being at the pinnacle of his career, Mr. Johnson apparently put his pride aside and had the staff draw three or four alternative building elevations, arrayed side by side on one drawing sheet.  In the end, he prevailed upon the client to stick with the concept for a “Chippendale skyscraper.”

Consider how differently this scenario would play out today.  Instead of spending a chunk of time to draw a few more building elevations, all identical except at the top of the structure, copy/paste would have taken care of most of the work.  Then the alternative designs would have been modeled in 3D and rendered, animations would have been created, and the surrounding cityscape inserted.  In lieu of four very basic hand-crafted drawings, the client would have been treated to a wondrous Disney-like experience.  I believe that such a process would have mitigated Mr. Johnson’s persuasive powers, overpowering them with technology. Who knows which option would have looked most impressive in the new animated show, or if the original design would have ever survived and been built on Madison Avenue at 55th Street in Midtown Manhattan?

In today’s world, there is still a significant degree of trust in the architect’s professionalism.  But we live more in a world ruled by President Reagan’s dictum when negotiating with the Soviet Union back in the 1980s, “Trust, but verify.”  Because they know we can provide it without unduly burdening our financial performance, clients demand much more before they give us the go-ahead for proceeding from schematics to the next stage.  And we architects have gotten very good with the electronic wizardry needed to move the project accordingly.  There are assuredly other factors which contribute to this process change, including but not limited to the increased sophistication of clients and their professional facilities management help.  However, I believe that the nature of the relationship has inalterably changed to where architects must assume that their experience and demonstrated knowledge, no matter how impressive, is now a secondary influence.  The output from the tools we use are perceived as the tangible evidence of expertise.

The second process change brought about by technology relates to the intellectual process used to create.  When things were hand-drawn, ideas were conceived, and initial designs developed, more or less tabula rasa.  Yes, the designer probably had a concept which he or she had been mulling over, awaiting a needs program which it could fill.  But once the project was initiated, design became a reiterative process in which sketches, drawings, foam board, cardboard models, and other devices danced about until all were choreographed in a final schematic proposal.  In this sense, design was an additive process, in which ideas were proposed, accepted or rejected, developed, refined, and finalized.  Each step, in a way, built upon the previous one and the outcome, while perhaps roughly visualized from the start, would not be formalized until the building blocks underneath it had been crafted.

Today, due to the easy storage and ready access made possible by electronics, design exists in a milieu of existing templates and details, the better to boost financial performance in a very competitive business, as well as to reduce liability exposure.

We pull, probably too much, from the wellspring of available data and modify it.  In this sense, design has become an editive process.  This is not all bad; good ideas can have a long shelf life and wide applicability.  However, I believe there is a benefit in forcing the designer to view each project through a new lens.  Technology does not make this impossible, but it does make the editive process a bit too inviting.  Those of us who have experienced both methods know that the act of drawing, of using the hands to do more than move a mouse, significantly influences thinking.  This is not to say that one cannot create well if one does not draw; it simply means that one must recognize the cognitive differences associated with the different methods and tailor thinking accordingly.

So what does this process sea change portend for the future, or for the possible futures of design?  In one scenario, the depersonalization of design could be envisioned.  Multidisciplinary project teams are the norm anyway; an emphasis on tools and product over personality and vision would be a natural outgrowth from this direction.  This could herald the decline of “signature” architects and designs—or maybe not.

An alternative scenario might actually place a higher value on the visionary architect, and this value may actually be enhanced if conceptual thinking is done using hand tools more than machines.  Prior to industrialization, the rarity of machine-made utilitarian objects made them more highly prized than hand-crafted ones.  Today, with mass produced products of high quality in such abundance, people value the seldom-seen crafts objects that evidence the touch of the human hand—think of Navajo serapes.  Design processes could go in this direction, in which carefully fashioned hand-drawn design concepts form the basis for our modern buildings.  This would negate one of the benefits of BIM software, but would perhaps create a market for architectural drawings reminiscent of Hugh Ferris.  The art of drawing could again spur design theory.  Would clients, however, trust designs presented in this fashion?  Perhaps, if they perceive the designer’s ideas as the most important “product,” and if hand-wrought visions can gain panache.

Lest one think that this latter scenario is a nostalgic yearning for the good old days of hand drawing, however, consider the provocative thesis of Brynjolfsson and McAfee’s recent book, Race Against the Machine.  These two MIT economists note the exponential growth in the capacity of artificial intelligence to perform higher level functions that were inconceivable just a few short years ago—ponder for a start the operation of motor vehicles.  They posit that the not-too-distant future may see machines assuming so many advanced roles that human work becomes obsolete.  Are we architects ready for this?  Will design concepts be formulated by means of machine modification of stock electronic templates, and construction documents produced all online directly by clients’ selecting building floorplates, heights, materials, colors, and so forth from a drop-down menu?  Some of this is already in the marketplace.  Standardization of building codes, the global construction products pipeline, and other similar factors are driving things in this direction as well, and the economics of such a process could be compelling to clients—although it would obviate the need for many, if not all architects.  How will we “intervene” in the design process in such a world?  How will design, both product and process, retain the human touch?  Should it?

Regardless of the future direction of the profession, the revolution in office and design technology which I have witnessed in my lifetime has been exciting as well as an unquestioned benefit.  I still have a calcium deposit in my elbow from my work on drafting boards, and my trifocals are probably the result of all of the careful use of exacto knives on zipatone.  It is to the benefit of young architects that they don’t need to know what these things are.  At the same time, we must recognize that inalterable transformations have occurred in the processes we use, with many more to come.  After all, we may still only be on the first half of the chessboard!