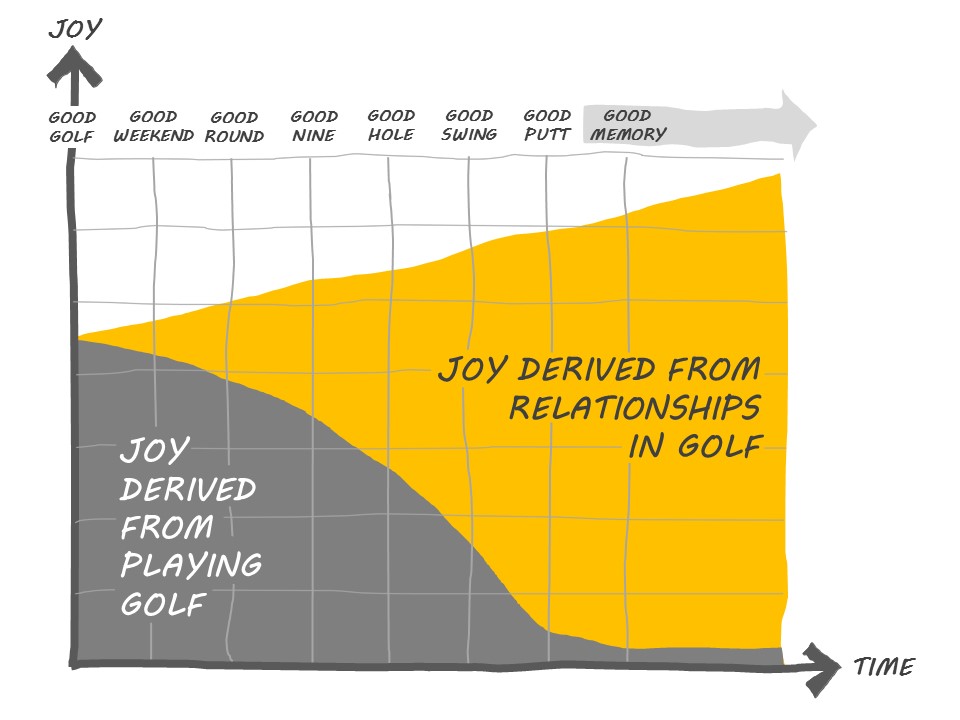 Stages of a Golfer's Life

​​No one has ever mistaken me for Jack Nicklaus.  Once upon a time, however, I was a decent enough golfer, about a seven or eight handicap in the days before there was something called an index.  That was five decades ago and I still play, although my handicap is now doubled.  While golf can be enjoyed throughout a lifetime, one must learn that the amount of joy depends on the willingness to accept the inevitable progression of the Stages of A Golfer’s Life.

At a young age my five brothers and I were taught the basics of the game by our dad.  Our lone sister did not take to the sport, a good thing for her siblings because she might be the best athlete among us.  Working at a golf course where we could often play helped make me competent by my early twenties, landing me in Stage One of the golfer’s life, the “good golf” phase.  Here, promise for the future is nourished by relatively frequent occurrences of well struck shots, good bunker outs, and sunk birdie putts.  Unfortunately, many who experience this stage never adjust to its all too rapid disappearance.

Unless proficient enough to pursue golfing as a profession or smart enough to get a job in sales, we move on to the “good weekend” stage.  Work and family elbow out time on the range and the course during this period.  Rounds on Friday through Sunday that show flashes of past glory will have to suffice.  A club championship might sneak its way in there, although it never did for me.

Next comes the “good round” stage.  Eighteen well-played holes show up regularly enough to foster anticipation that more will soon follow.  Sometimes they do, but more often they are interspersed with what would have not long ago been considered off-days.  The exceptions start to look like the rule.

In the following stage, the “good nine,” hope for better has become but a glimmer.  A sterling eighteen-hole round of golf has become a rarity, and one must learn to be satisfied with only a periodic appearance of nine-hole numbers below 40 materializing on the scorecard.

By now you’ve probably guessed the remaining trajectory.  The “good holes” stage is succeeded by the “good swing” and “good putt” phases.  There is nothing beyond this except the “good memory” stage.  Bottom line, the golfer’s life will never arrive at a satisfying ending.  Some of us may take longer than others to reach this fate, but there is no escape.

Given this dreary outlook, it’s fair to question why so many pursue this activity, and for so long.  Some say that one good shot during a round of golf brings you back for another go, and there is unquestionably some truth in that.  Other dimensions beyond the game itself, however, ensure its continuing lure.

For one thing, the activity of golf is pleasing and healthful, especially when one walks.  Being outdoors and in contact with nature cleanses the body and mind.  And nature even in a somewhat contrived state has appeal if one learns to understand the design principles that shaped it.  Golf architecture incorporates facets of landscape design and engineering in addition to playing strategy.  Any level of golfer can learn to appreciate its finer aspects.

Golf’s most fundamental appeal, however, goes beyond the activity of the game or its green environment.  Despite being scattered across the country, my brothers and I still manage to get together with old friends for an almost-annual golf “tournament.”  Our sister usually participates too; just as important, her children do.  The “next generation” now actively competes, greatly expanding the field and reminding those of us in the “good holes” stage what the “good golf” phase was once like.  Golf is an excuse to gather our extended families together—brothers, sisters, friends, cousins, nieces, and nephews.  Time spent together on and around the golf course builds relationships.

As any practitioner of the game will tell you, golf is as frustrating as it is captivating.  In spite of this, it provides enjoyable activity within nature’s beauty.  More importantly, it helps bond families and friends, no matter your stage of a golfer’s life.